Jamie Shea is involved with several prominent academic institutions and acts amongst others as professor of the Collège d’Europe, Bruges, Visiting Lecturer in the Practice of Diplomacy, University of Sussex, Associate Professor of International Relations at the American University, Washington DC, where he also holds the position of Director of the Brussels Overseas Study Programme, and lectures at the Brussels School of International Studies at the University of Kent. He also is a regular lecturer and conference speaker on NATO and European security affairs and on public diplomacy and political communication and lobbying. He holds a D.Phil. in Modern History from Oxford University (Lincoln College), 1981. 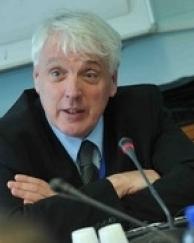