Claude-France Arnould is the Chief Executive of the European Defence, having assumed the role on 17 January 2011. In October 2013,Member States unanimously extended hermandate by an additional year until 15 January 2015. Previously, Ms. Arnould worked on defence matters in other EU positions. She led the Crisis Management and Planning Directorate (CMPD) at the General Secretariat of the Council of the European Union, between 2009 and 2010, and as Director for Defence Issues at the General Secretariat of the Council ofthe European Union from 2001 to 2009 (incharge of operations, military capabilities, partnerships and chair of the EU SatelliteCentre Board).

Claude-France Arnould started her career at the French Ministry of Foreign Affairs, as Desk Officer at the North America Directorate (1981-1983). Afterwards, she became Desk Officer at the Economic and Financial Affairs Directorate, at the French Ministry of Foreign Affairs (1983-1986), responsible for EC trade policy and external relations. After serving at the Private Office of the Minister for European Affairs (dealing with Community issues), in 1987, she became Secretary-General of the French National School for Public Administration (ENA), until 1989. In 1989, she was appointed Deputy Director of European Community Affairs, at the French Ministry of Foreign Affairs (in charge of external relations, trade, budget, institutions, CAP and development). She was then posted in Germany, as First Counsellor of the French Embassy (1994-1998).

Ms. Arnould has been “Ministre plénipotentiaire” (French Ministry of Foreign Affairs) since June 2001. She is a former student of the Ecole normale supérieure, and holds an agrégation in Classics and a degree in art and archaeology. Ms. Arnould is a former student of the Ecole Nationale d’Administration (ENA). Claude-France Arnould has been awarded the distinctions of Chevalier de la Légion d’honneur, Officier de l’Ordre National du Mérite and Bundesverdienstkreuz Erster Klasse. 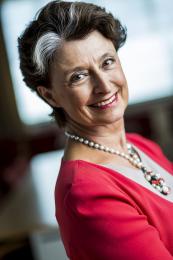