Born in February 1971 in France (Burgundy region), he’s graduated in Political sciences and International affairs from Paris Political Sciences Institute (IEP, 1989-1993). He served as a civil servant within the French Ministry of Defence from 1994 to 2002, with numerous postings in the Balkans (Bosnia-Herzegovina, Kosovo) and as adviser to the head of French External Intelligence Directorate (DGSE) from 2000 to 2002. After an assignment in Geneva to the French Representation to the United Nations (2002-2005), he joined the cabinet of the French Minister for Foreign affairs as a personal adviser for South-Eastern Europe and Afghanistan (2005-2007). Elected to the European Parliament in June 2009, he is member of the Foreign affairs Committee and chairman of the Subcommittee on “security and defence”. He is also, since 2010, an elected member of the Regional Assembly of Burgundy. He is also amember of the French centre-right party, Union pour un Mouvement Populaire (UMP), where he is in charge of the European Defence policy. He is awarded of the French “Ordre National du Mérite” (national order of merit) in 2000. 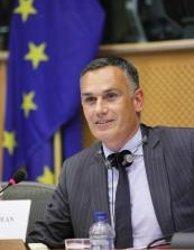